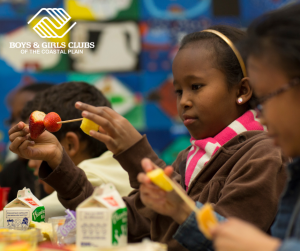 Boys & Girls Clubs of the Coastal Plain is seeking Child and Adult Care Food Program (CACFP) Food Service Providers and Vendors that are able to serve in the following capacities:

Monday – Friday delivery times between 2:30 – 4:30 p.m., roughly 800 – 1000 individually packaged meals and/or 400 – 600 snacks (following CACFP Meal Patterns) at a temperature of 140 degrees F for hot foods and 45 degrees F. Daily deliveries will be to the following locations with meals in containers and covered:

Only sealed bids will be accepted and must be mailed no later than September 15 at 4:00 p.m. to:

Late bids will be returned, regardless of postmark or mailing receipt date. Bidders are required to attend Bidder’s Conference Sept. 16 at 1:00 p.m. via Zoom, Meeting ID: 879 529 9816 for the opening of bids. Notice of selections will be Friday, Sept. 16. Potential contract will be in effect Oct. 1, 2022.